Could ALGAE be the secret to clear skin? Study finds fatty acids in marine plants can treat acne Read more: 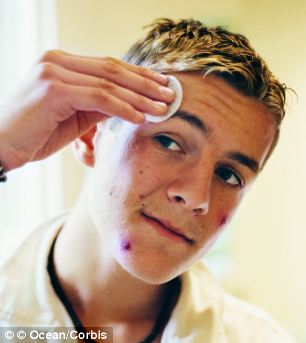 Could ALGAE be the secret to clear skin? Study finds fatty acids in marine plants can treat acne Read more:

Acne is the bane of many a teenager’s life, but researchers now believe they may have found a novel treatment for it.

They discovered that fatty acids produced by algae have cleansing qualities.

The researchers, at the University of Stirling’s Institute of Aquaculture, found the fatty acids could prevent the growth of Propionibacterium acnes – a bacterium which causes the common skin condition.

They say that fatty acids stopped the growth of the bacterium as well as other acne treatments that contain ingredients such as benzoylperoxide and salicylic acid.

Marine Biotechnology lecturer Dr Andrew Desbois, who led the study, said: ‘Many fatty acids inhibit or kill bacteria and now some of these have been shown to prevent the growth of Propionibacterium acnes.’

He added that ‘fatty acids are present naturally on our skin to defend us against unwanted bacteria’ – so applying more would boost our existing defences.’

The researchers found that six different fatty acids are effective at combating acne.

These include omega-3 fatty acid and omega-6 fatty acid.

They also include eicosapentaenoic acid (EPA) and dihomo-gamma-linolenic acid (DGLA).

EPA is produced by marine algae and then accumulated in fish like salmon via the food chain. DGLA is made by some types of brown algae.

The team are hoping to create a skin lotion containing the beneficial fatty acids as a treatment for acne.

They hope it could eventually replace some of the current drugs which are known to cause problematic side effects.

Dr Desbois said: ‘Normally, we obtain these beneficial fatty acids through consuming fish or seaweed in our diets.

‘However, we are planning to formulate the fatty acids into an ointment that can be applied to the skin to help people suffering with acne.’

The research was published in the journal Marine Drugs.